Bound By Nothing: Jenn-Air’s “The New Face of Luxury” Challenges Convention Head On 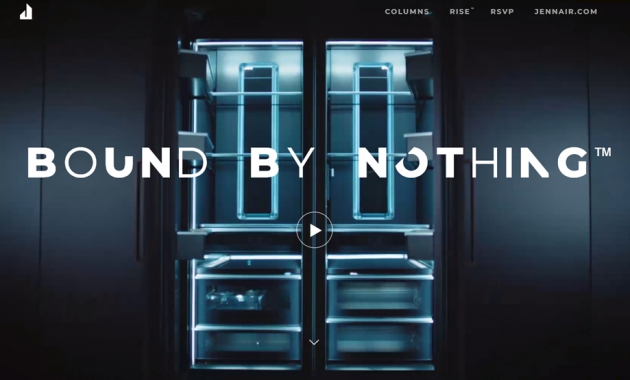 With the surge of luxury lines entering the high-end kitchen appliance space, it’s no surprise that Jenn-Air has made its own splash.  At a recent design show at the end of March, it unveiled its new campaign, titled “Bound By Nothing,” with a bold and rebellious video, teasing a new product line and unveiling a new mobile app.  With this new rebranding campaign, Jenn-Air has managed to make its own statement and stand apart from the other companies in its new marketing campaign.  It embraces a methodology of “limitless possibilities” by “challenging convention,” according  Jenn-Air marketing director John Hall to brand channel.

Though still shrouded in mystery, Jenn-Air’s video release has made its shocking entrance to say it’s “not your mama’s old kitchen appliances.”  Unconventional, edgy, and even sexy, it seeks to destroy the old myth of luxury and bring their reinvented premium product line to a new, younger audience.  Out with the old school dullness of fancy cars and stuffy parties, in with progressive technology and stylish design.

While other companies have been in the midst of their own luxury reinvention, e.g. Dacor since its acquisition by consumer giant Samsung, JennAir’s approach seeks to shock with provocative messaging. Dacor has taken a more understated approach to disrupting the status quo of the luxury kitchen appliance market, while Jenn-Air’s tease seems to be hell bent on turning heads with the anticipation of its product unveiling.  And it seems to working, with nearly a million hits on YouTube alone at the time of this writing.

There are certainly similarities between the two companies efforts to compete with the established giants like Wolf, Miele and Gaggenau.  Both Dacor and Jenn-Air offer up sleek designs, in the newest black stainless steel appliance finishes, and both feature the use of apps to create a more convenient and smarter user experience in the kitchen and home.

Though it’s hard to determine what Jenn-Air has to physically bring to the table as of yet — with no real product line fully revealed — Jenn-Air’s new app might be a hint as to just how inventive they’re planning to become.  Compared with Dacor’s current iQ Kitchen app — a white, traditionally modernist format — Jenn-Air’s app will boast a dark dramatic design.

Jenn-Air’s app seems prepared to be a more personalized experience for the user, offering voice commands and even more device compatibility than the competition.  Not only will it be smartphone compatible, but it will also be Google Home, Amazon’s Alexa, Apple Watch, and Nest accessible.  Jenn-Air utilizes the latest tech and smart capabilities to best fit the new expectations in the digital marketplace as much as in the physical.

The “Bound By Nothing” campaign screams for attention.  With the use of eye-catching marketing and the preview of a slick mobile application that encourages customizable experiences for every user.  What little we’ve seen has shown that the company is serious about joining the ranks of the other luxury kitchen appliance giants.  Time will tell how well Jenn-Air’s new lineup will compete against the establishment.