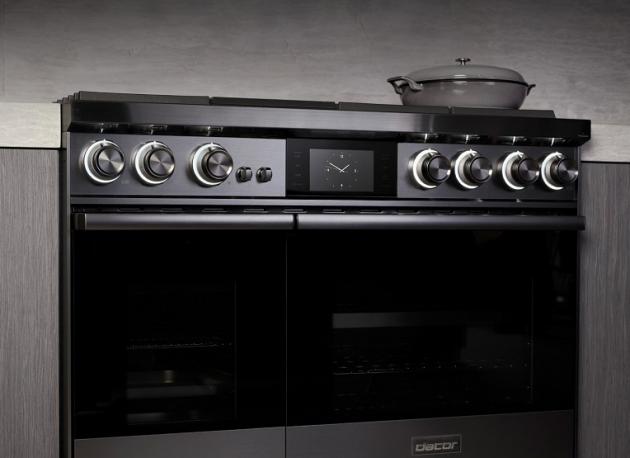 Samsung set a goal to become a global leader in the home appliance sector and proved that it was serious with the purchase of Dacor in 2016. Samsung acquired the southern California-based Dacor for a reported $150 million, to try to elbow its way into the luxury appliance arena. Everyone thought that the purchase made sense for Samsung at the time, because the premium appliance sector lacks a technology-focused competitor. Samsung brings the technology to the table in a big way and it shows with the 2017 release of Dacor’s Modernist line.

You may have seen Dacor’s new upscale lineup during the big marketing push that coincided with the 2017 Emmy Awards. The Dacor 48” Modernist Range is definitely a show-stopper, but does it live up to the hype? Here is a closer look at this luxury range and what its entrance into the premium appliance marketplace could mean.

This range looks like it was built using the design of Dacor’s Discovery range series as its baseline. The black stainless graphite finish and handles will blend seamlessly with any kitchen design. The Dual-Fuel range stands out from the pack of pro-style and “celebrity chef” ranges, and there is nothing else quite like it on the market.

The Dacor Modernist Range has other features that also invite users to keep their eyes on it. Ambient lighting over the burner knobs make them stand out. Speaking of the metal knobs, they illuminate when in use. The LED touch control pad lights up and pivots out toward the user when you tap it.

The cooktop is also striking. It has six burners, cast-iron grates, a wok grate and an integrated 1,400-watt griddle. The brass burner caps are removable for easy cleaning. The cooktop itself is sealed.

Everything about the Dacor Modernist Range is designed to visually impress. It’s a luxurious, spacious double oven with a playful, and seductive, list of features. It has so many options available that it will inspire the imagination of any home cook.

The 7” full-color LCD touchscreen panel on the range was clearly designed with mobile users in mind. The controls and settings are simple to navigate, and the operation will be familiar to anyone who has used a tablet or smartphone. Dacor began integrating its appliances with the Android platform a few years ago, so the new marriage with Samsung has worked out nicely on the technology front.

Dacor’s iQ Kitchen Connect app allows users to program, control and monitor timers on the range, or turn the ovens on or off. The lighting inside the oven can also be adjusted for those who want to watch the food as it cooks. The touchscreen provides pre-programmed settings for common dishes and allows you to pull up new step-by-step recipes. Did we mention timers? A busy chef can have up to ten separate timers running (for ten separate dishes) at once on Dacor’s touchscreen.

The ventilation hood provides another glimpse into the Dacor/Samsung technology leap. This is the only hood on the market (so far) that automatically connects via Bluetooth to the range. The hood automatically adjusts the ventilation speed based on what the rest of the range is doing.

Aside from the design, it is the steam cooking feature of the Modernist range that really stands out. The oven has a 51 oz. removeable reservoir that can be filled with water for true steam baking and roasting. This allows the chef to steam vegetables, meats and more, in both ovens. Steaming allows most foods to retain their color, flavor and nutrients that are lost in conventional cooking. The steam feature turns out professional restaurant-quality roasted meats, baked breads and brightly-colored, steamed vegetables every time. The dual ovens provide both steam and electric convection cooking.

The cooktop has six sealed brass burners, including two 22,000 BTU high-heat burners. A simmer burner at a professional-grade 77 BTUs is also available. The other features of the cooktop are fairly standard for modern ranges, including the cast-iron wok ring and a 1,400-watt detachable griddle.

Dacor’s Modernist dual range is a solid entry for the upscale appliance market. Samsung clearly believed that it could capture a segment of the luxury market, which is currently led by Sub-Zero/Wolf, Miele and Thermador. Samsung was the first appliance manufacturer to start implementing aesthetics into their designs and that truly shows with the Dacor Modernist range. It is a technological leap forward compared to everything else on the market.

This range is designed to cater to the home entertainer. Everything about the range screams, “Watch me in action!” From the illuminating knobs to the studio lighting inside the ovens and the pop-out display, the Modernist range is meant to be an appliance that is not only functional, but also visually appealing to watch. Samsung has done their market research and is clearly looking for coastal customers who live in open-style condos or lofts, where the guests can see into the kitchen.

The Modernist line will also be a good thing for the luxury appliance market. The industry leaders in this sector have not had an aggressive, technology-focused competitor to worry about – until now. Samsung’s creative design strategies are exactly what the upscale kitchen appliance market has been missing. You can expect Sub-Zero/Wolf and other manufacturers to begin mimicking the innovations that the Dacor Modernist range has implemented.

This new competition in the luxury sector from Dacor/Samsung will be great for consumers and frankly, for all the competitors. If Dacor shakes up the market, the other manufacturers will have to respond with new innovations. As for consumers, if you’re looking for a technology-focused range that will make your dinner guests jealous, you can’t go wrong with this one.